Collette and Lee from Cambridge lost 2 babies to miscarriage. They were cared for Tommy’s Centre for Early Miscarriage Research at Coventry & Warwick Hospital, where their daughter Mitzi was born. 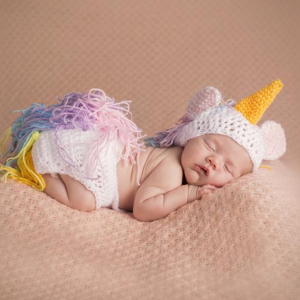 Mitzi was recently the star of Poundland’s in-store radio, where she wished shoppers a Merry Christmas and thanked them for donating to help more children like her!

Collette always knew she wanted children and when she married the man of her dreams, life didn’t seem like it could get any better.
2 months after getting married, Collette found out she was pregnant.

‘Lee and I were ecstatic, we couldn’t believe how blessed we were. “How easy was that” we both thought and our journey towards becoming parents had begun!’

‘We told our parents and a few close friends. I was a healthy 29 year old, who exercised regularly, ate healthily, the correct weight, didn’t smoke, never taken drugs and researched what you could and couldn’t do/eat when pregnant so didn’t even consider miscarriage being a possibility.’

Collette started to bleed. She had an emergency scan where she saw her baby with a heartbeat. Sadly her bleeding continued, and she lost her baby at 8 weeks and 2 days.

‘My world ended at that moment and a part of me had died that day also. I was a broken lady.’

‘Days turned into weeks and weeks turned into months. It was like a nightmare that never stopped. I would wake up every day and for a spilt second think I was still pregnant and then realise no, this wasn’t a nightmare, this was real life, this was happening to me. I had to try and get on with life whilst trying to grieve for my angel and everyday was an uphill struggle.’

‘Devastatingly my relationship with my husband Lee was being tested to the limited. A newlywed couple on the verge of divorce. We were dealing with this so differently we couldn’t help each other, we had no strength to help one and other.’

‘The words that no person wants or deserves to hear “I am so sorry but we can’t find a heartbeat”… The light at the end of this truly dark and lonely tunnel didn’t come, the nightmare just continued.’

Collette was referred to Tommy’s Centre for Early Miscarriage Research at Coventry & Warwick Hospital, where she saw Professor Siobhan Quenby.

‘She had no doubt in her mind that I wouldn’t get a child and categorically told me “you will get a baby and I won’t let you leave my care until you do”. I was also introduced to Natalie, Debbie and Lindsey the midwives in Professor Quenby’s Team. They were also such amazing ladies.’

‘I felt understood, really understood and that everything I was feeling and thinking was perfectly OK. These three ladies quickly became an imperative support network for me, a group of people that understood my grief and I could contact at any time and talk things through.’

Collette took part in a Tommy’s research trial investigating a new treatment to prevent miscarriage. When fell pregnant again, she was cared for by the Tommy’s team for the first 3 months of her pregnancy before she was transferred to her local hospital, The Rosie at Addenbrookes Cambridge.

I am forever grateful for everything the Tommy’s team have done for me and the organisation and people will always hold a special place in my heart – Thank You just doesn’t seem enough! To me these ladies are living angels. Without the amazing work and research they conduct and dedicate their time to, little Mitzi might not have made it into this world.